In-situ composites are a class of composite materials in which the reinforcement is formed within the matrix by reaction during the processing.In-situ method of composite synthesis has been widely followed by researchers because of several advantages over conventional stir casting such as ability to introduce reinforcements with fine particle size, clean interface and good wettability of the reinforcement with the matrix and homogeneous distribution of the reinforcement. Besides this, in-situ processing of composites by casting route is also economical and amenable for large scale production as compared to other methods such as powder metallurgy and spray forming. The research work in the group has been on TiB2and TiC as reinforcements for Al-based in-situ composites. TiB2 and TiCreinforced composite processed using the salt reaction route is cost effective, and the TiB2and TiC also acts as a heterogeneous nucleation site during solidification of Al leading to grain refinement.

The research on Al-based in situ composites started about two decades ago, and there has been a significant increase in the number of papers in recent years. Figure 1(a) shows the number of publications on Al-based cast in-situ composites from 1995 to 2014 produced by casting methods. Figure 1(b) shows a pie chart of the percentage of total papers published on different in-situ reinforcements.

The Al-TiB2in-situcomposites are processed by adding a mixture of two halide salts K2TiF6 and KBF4 in the required stoichiometric ratio (Ti to B = 2.2:1) to the Al melt at a temperature of 800°C. There is an exothermic reaction (SHS) between the salts and molten aluminum, which leads to in-situ formed TiB2 particles that are uniformly distributed in the melt.

Our group is the first in the world to be able to completely suppress the formation of Al3Ti particles during the formation of Al-TiB2and Al-TiC composites by salt route. The presence of brittle Al3Ti particles is known to affect the mechanical properties of these composites adversely. Figure 2(a) and (b) shows the XRD plot of A356 alloy and A356-10TiB2in-situcomposite and extracted particles from the A356-10TiB2in-situcomposite, which clearly shows the complete formation of TiB2 without any Al3Ti phase. 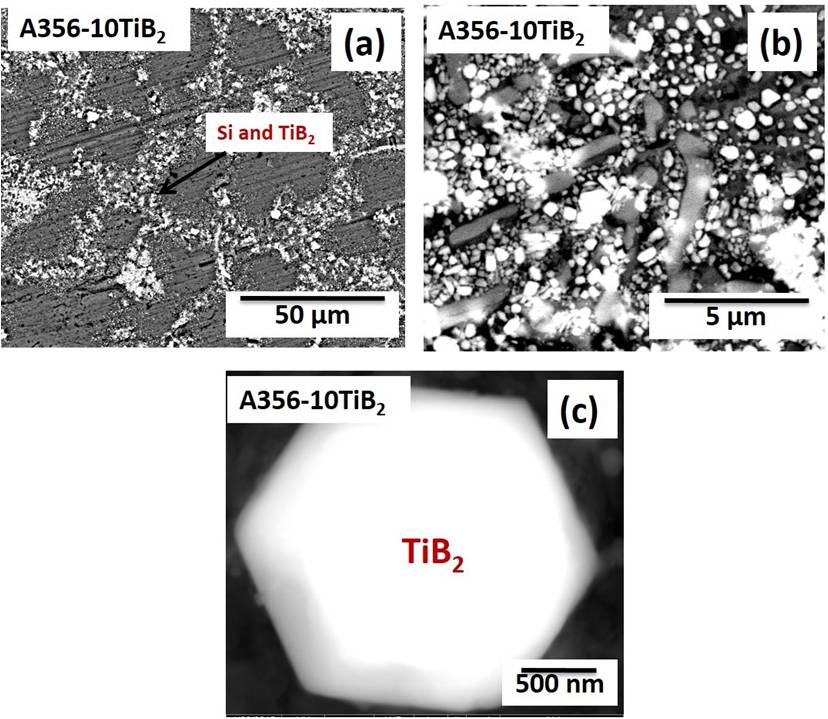 Fig. 3:SEM micrograph of A356–10TiB2 composite (a) at low magnification and (b) shows the TiB2 particles in the inter-dendritic region and (c) hexagonal shaped TiB2 particle.

A significant improvement in the tensile properties and wear resistance of these in-situ composites has been observed. With the addition of 10 wt.% TiB2 in Al-7Si alloy, an increase of 108% in hardness, 123% in yield strength, 43% in UTS and 33% in Young’s modulus was observed compare with Al-7Si alloy. Figure 4 shows average values of tensile properties. 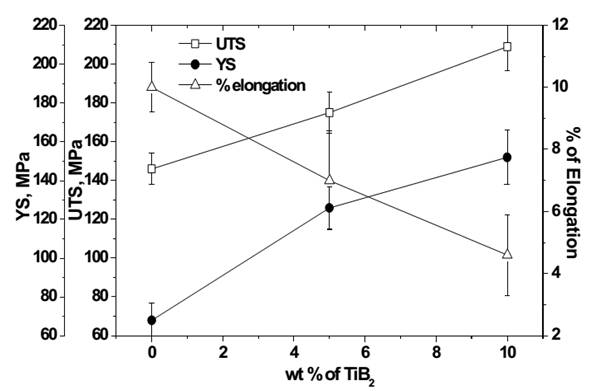 Al-7Si alloy reinforced with 5 and 10 wt.% TiB2 composite showed 36 and 66% improvement in wear properties, respectively, compared with the Al-7Si alloy. The wear rate reduced with increase in wt.% TiB2  as shown in Fig.5. 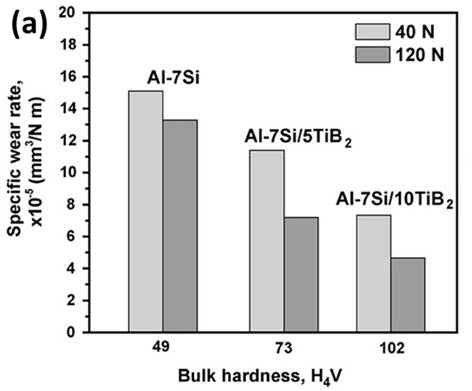 Fig. 5:Specific wear rate of Al-7Si-TiB2composites as a function of load.