Sluggish diffusion has been put forward as one of the core effects in high entropy alloys (HEAs) and is believed to be responsible for their high thermal stability and creep resistance. Slower diffusion is also presumed to play a role in phase evolution and promote formation of nano-precipitates and amorphous phases in many HEAs. However, till date, reports on diffusion in HEAs are scarce and it has only been measured using interdiffusion approach.

We use both tracer (in collaboration with Dr. Sergiy Divinski, University of Muenster, Germany) and interdiffusion (in collaboration with Dr. Aloke Paul, IISc Bangalore, India) techniques to investigate diffusion behaviour in HEAs. Our objective is to determine tracer and interdiffusion coefficients in CoCrFeNi and CoCrFeMnNi alloys so as to understand diffusion kinetics in HEAs without and in presence of chemical driving force. These alloys are chosen as they show single phase FCC structure which is desirable for high temperature applications.

Fig. 1 shows the Ni tracer diffusion coefficients measured for CoCrFeNi and CoCrFeMnNi, and comparison with other FCC systems [1]. It is clear that diffusion rates slow down with the increase in number of components. The exact mechanism of diffusion and the diffusivities of other constituent elements are current focus of our studies. 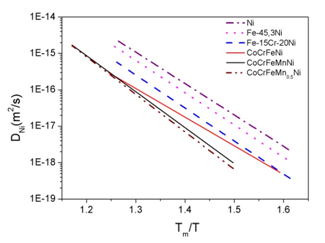