Predicting the bulk metallic glass (BMG) forming compositions in multicomponent alloys is currently an actively pursued research area. The motivation for this is attributed to the interesting combination of properties and thermoplastic forming ability of BMGs. Glass forming ability (GFA) criteria that incorporate thermodynamic and topological parameters have been the most reliable guideline to identify BMG forming compositions in various alloy systems. PHSS parameter which is based on the above principles is efficient to assess GFA in multicomponent systems including high entropy alloys (HEAs). The consistency of PHSS parameter to identify BMG forming compositions has been demonstrated recently in Zr-Ti-Cu-Ni-Al system through statistical approach (Fig. 1).

However, the utilization of such macroscopic thermodynamic parameters for identifying BMG formers has to be guided by the underlying knowledge of atomic cluster dynamics to portray a comprehensive picture of BMG formation. The possible reason for this is the composition sensitivity of BMG forming alloys. Hence the manner in which an individual atomic cluster interacts with other clusters in its vicinity and the way this contributes to evolution of configurational entropy as function of composition will prove to be vital information in such understanding. However, the topological nature of atomic clusters in high entropy regime of Zr-Ti-Cu-Ni-Al alloy system is not reported in literature. In this context, understanding the stability of atomic clusters in binary and ternary alloys like Zr-Cu and Zr-Cu-Al and extrapolating such knowledge to HEA clusters will accelerate the BMG development in high entropy compositional space. To realize this goal, Voronoi clusters reported through molecular dynamics simulations for Zr-Cu binary system have been studied for their stability through Ascalaph designer molecular modeling tool. The bond energetics of statistically dominant Voronoi clusters has been utilized to depict the origin of primary crystalline phases in Zr-Cu-Ni-Al quaternary system (Fig. 2). Furthermore, the utility of bond energetics of Voronoi clusters in portraying cluster dynamics of Zr-Cu and Zr-Cu-Al system and their relevance to high entropy alloys is currently being pursued. 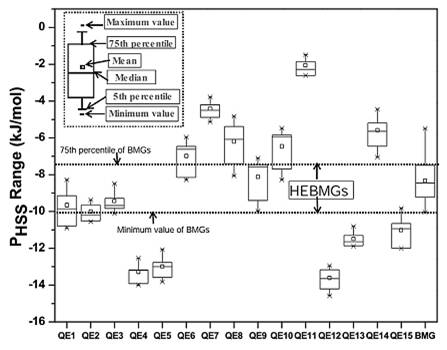 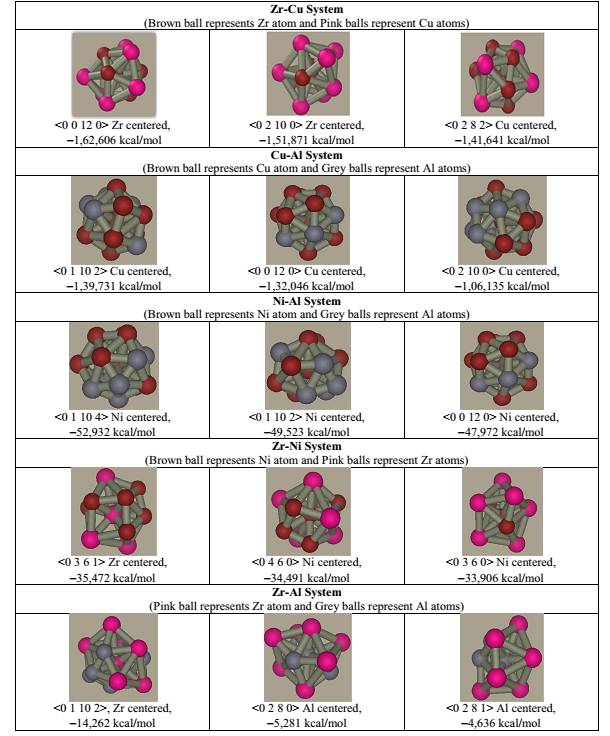